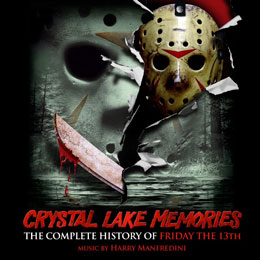 Coming Soon to Dark Delicacies:
Due to popular demand, the new original score to the hit Blu-ray release Crystal Lake Memories will be soon be available at Dark Delicacies.

NOW AVAILABLE! Really cool T-Shirts with the Friday the 13th Body outline, and filled in with excerpts from the score to Friday the 13th. Sizes range from Small to 4XL, and can be ordered now from Dark Delicacies. Click the image to enlarge. 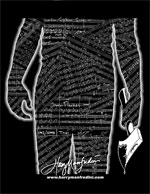 All CDs and CD-Rs that are on the Audio Page of the website are now for sal e at Dark Delicacies. This is a fantastic store. Del and Sue are just the greatest people. This place will be the sole distributor of these albums. There are going to be special sales and deals available, and of course all will be signed. I believe there is going to be an incentive deal in that if you purchase two cds, you will be able to select a free one from a special group. Check out the whole store. They have it all!

A Chance in the World

An inspiring heartwarming true story of a young abused foster child who escapes to a caring and supportive home and becomes a man of honor and success.

The Nurse with the Purple Hair

A documentary about hospice care. That is centered around Michelle Lasota, a hospice nurse who takes us on her journey into hospice care. Heartwarming, Educational and Inspiring.

Friday the 13th: The Game

The score to the popular multi player game.

A serial killer, a Stalker each have secrets in a game of terror. Directed by Tom Holland and written by Victor Miller

A horror film about a rabbi whose delusion is passed to his son who continues the terror. Written and Directed by Eban McGarr

A powerful short dealing with depression and mental illness and the need to understand it. Directed by Nicole Jones Dion

A sweet comedy written and directed by Nelson Torres about the early troublesome years of the young Clark Kent.

A warm and tender story of an ailing music teacher who has inspired so many students. Directed by Sean Cunningham

A Faustian tale of a hair metal rocker, two young rockers, and the mystery that must be solved. Written and Directed by Brad Bruce

A saga of love, hate, deceit that spans a family for years. love never dies and will find its way no matter how much time has passed. Produced by Theresa Chaze. Armand Mastroianni Directs